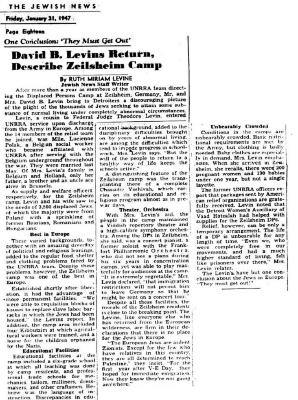 Report of 1947 Visit to Zeilsheim Displaced Persons Camp in Germany

caption:
One Conclusion: ‘They Must Get Out’

After more than a year as members of the UNRRA team directing the Displaced Persons Camp at Zeilsheim, Germany, Mr. and Mrs. David B. Levin bring to Detroiters a discouraging picture of the plight of the thousands of Jews seeking to attain some substance of normal living under completely abnormal circumstances.

Levin, a cousin to Federal Judge Theodore Levin, entered the UNRRA service upon discharge from the Army in Europe. Among the 14 members of the relief team he joined, was Mlle. Luciene Polak, a Belgian social worker who became affiliated with UNRRA after serving with the Belgium underground throughout the war. They were married last May. Or Mrs. Levin’s family in Belgium and Holland, only her father, a brother and an uncle are alive in Brussels.

As supply and welfare officers respectively, for the Zeilsheim camp, Levin and his wife saw to the needs of 3,500 displaced Jews, of which the majority were from Poland with a sprinkling of former Russians, Romanians and Hungarians.

Best in Europe.
These varied backgrounds, together with an amazing diversity of political and religious leanings, added to the regular food, shelter and clothing problems faced by the UNRRA team. Despite these problems, however, the Zeilsheim camp was one of the best in Europe.

Established shortly after liberation, it had the advantage of more permanent facilities. “We were able to requisition blocks of houses to replace slave labor barracks in which the Jews had been houses,” the Levins report. In addition, the camp area included four Kibbutzim at which agricultural workers were trained, and a home for the children orphaned by the Nazis.

Educational Facilities.
Educational facilities at the camp included a six-grade school at which all teaching was done by camp residents, and professional trade schools for mechanics, tailors, milliners, dress makers, and other craftsmen. Hebrew was the language of instruction. Discrepancies in educational background, added to the disciplinary difficulties brought on by years of abnormal living are among the difficulties which tend to impede progress in schoolwork.  Mrs. Levin says, “But the will of the people to return to healthy way of life keeps the schools active.”

A distinguishing feature of the Zeilsheim camp was the transplanting there of a complete Chassidic Yeshivah, which carries on its educational and religious program almost as in prewar days.

Theater Orchestra.
With Mrs. Levin’s aid, the people in the camp maintained a Yiddish repertory theatre and a high-calibre symphony orchestra. Among the DPs in Zeilsheim, she said, was a concert pianist, a former soloist with the Frankfort Philharmonic Orchestra, who did not see a piano during his six years in concentration camps, yet was able to play masterfully for audiences at the camp.
“It is extremely regrettable,” Mrs. Levin declared, “that immigration restrictions will not permit him to leave Germany so the he might be sent on a concert tour.”

Despite all these facilities, the morale of the Zeilsheim residents is close to the breaking point. The Levins, like everyone else who has returned from the European wilderness, are firm in their declarations that there is no place for the Jews in Europe.

“The European Jews are ardent Zionists. Except for the few who have relatives in this country, they are all determined to reach Palestine,” they insist “For the first year after V-E Day, they hoped for immediate emigration. Now they know they’re not going anywhere.”

Unbearably Crowded.
Conditions in the camps are unbearably crowded. Basic nutritional requirements are met by the Army, but clothing is badly needed. Baby clothes are especially in demand, Mrs. Levin emphasizes. When she arrived in Zeilsheim, she recalls, there were 200 pregnant women, and 130 babies under one year, but not a single layette.

The former UNRRA officers report that packages by American relief organizations are gratefully received. Levin noted that the Detroit Women’s Auxiliary of Vaad Hatzalah had helped with supplies for the Zeilsheim DPs.

Relief, however, can be only a temporary arrangement. The life of a DP is unbearable for any length of time. “Even we, who were completely free a much higher standard of living, felt like prisoners over there,” Mrs. Levin relates.

The Levin’s have but one conclusion about the Jews in Europe. “They must get out!"