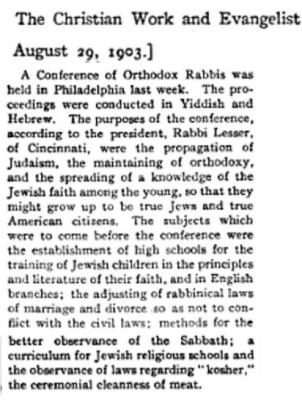 caption:
The Christian Work and the Evangelist

A Conference of Orthodox Rabbis was held in Philadelphia last week. The proceedings were conducted in Yiddish and Hebrew. The purposes of the conference, according to the president, Rabbi Lesser, of Cincinnati, were the propagation of Judaism, the maintain of orthodoxy, and the spreading of a knowledge of the Jewish faith among the young, so that they might grow up to be true Jews and true American citizens. The subjects which were to come before the conference were the establishment of high schools for the training of Jewish children in the principles and literature of their faith, and in English branches; the adjusting of rabbinical laws of marriage and the divorce so as not to conflict with the civil laws; methods for the better observances of the Sabbath; a curriculum for Jewish religious schools and the observance of laws regarding “kosher,” the ceremonial cleanness of meat.