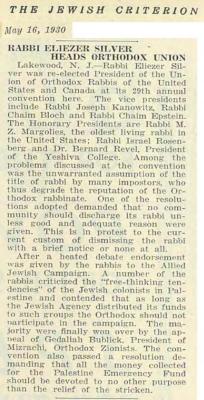 Lakewood, N.J. – Rabbi Eliezer Silver was re-elected President of the Union of Orthodox Rabbis of the United States and Canada at its 29th annual convention here. The vice presidents include Rabbi Joseph Kanowitz, Rabbi Chaim Bloch and Rabbi Chaim Epstein. The Honorary Presidents are Rabbi M. Z. Margolias, the oldest living rabbi in the United States; Rabbi Israel Rosenberg and Dr. Bernard Revel, President of the Yeshiva College. Among the problems discussed at the convention was the unwanted assumption of the title of rabbi by many imposters, who thus degrade the reputation of the Orthodox rabbinate. One of the resolutions adopted demanded that no community should discharge its rabbi unless good and adequate reasons were given. This is in protest to the current custom of dismissing the rabbi with a brief notice or none at all.

After a heated debate, endorsement was given by the rabbis to the Allied Jewish Campaign. A number of the rabbis criticized the “free-thinking tendencies” of the Jewish colonists in Palestine and contended that as long as the Jewish Agency distributed its funds to such groups the Orthodox should not participate in the campaign. The majority were finally won over by the appeal of Gedallah Bublick, President of the Mizrachi, Orthodox Zionists. The convention also passed a resolution demanding that all the money collected for the Palestine Emergency Fund should be devoted to no other purpose than the relief of the stricken.