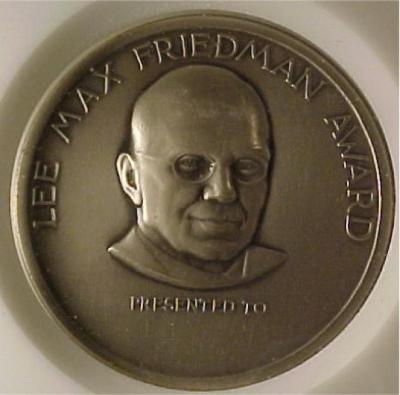 Description
Among medals sculpted by the late Paul Vincze is a uniface award presentation medal of the American Jewish Historical Society which has the portrait of Lee Max Friedman.

Max L. Friedman was born in 1871 in Memphis, Tenn. of German Jewish parents.  He was a lawyer by profession, a historian by hobby, and a patron of education.  He became a note trial attorney in Boston and a teacher and pundit of law.  He served as vice-president and professor of law at Portia Law School, Boston, contributing learned articles to law journals.

He was immensely intrigued with American Jewish history, and in 1903 began his association with the American Jewish Historical Society eventually serving as president (1948-53) and honorary president (1953-57).  In 1905, he was chairman of the celebration in Boston of the 250th Anniversary of Jewish Settlement in the United States, and half a century later he was the main speaker at Symphony Hall, Boston, on the occasion of the tercentenary.