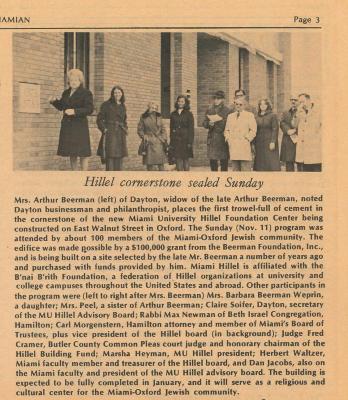 Mrs. Arthur Beerman (left) of Dayton, widow of the late Arthur Brennan, noted Dayton businessman and philanthropist, places the first trowel-full of cement in the cornerstone of thenew Miami University Hillel Foundation Center being constructed on East Walnut Street in Oxford. The Sunday (Nov. 11) program was attended by about 100 members of the Miami-Oxford Jewish community. The edifice was made possible by a $100,000 grant from the Beerman Foundation, Inc., and is being built on a site selected by the late Mr. Beerman a number of years ago and purchased with funds provided by him. Miami Hillel is affiliated with the B'nai B'rith Foundation, a federation of  Millet organitalions at university and college campuses throughout the United States and abroad. Other participants in the program were (left to right after Mrs. Beerman) Mrs. Barbara Brennan Weprin, a daughter; Mrs. Peel, a sister of Arthur Beeman; Claire Soifer, Dayton, secretary of the MU Hillel Advisory Board; Rabbi Max Newman of Beth Israel Congregation, Hamilton; Carl Morgenstern, Hamilton attorney and member of Miami's Board of Trustees, plus vice president of the Hillel board. (In background); Judge Fred Cramer, Butler County Common Pleas court judge and honorary chairman of the Hillel Building Fund; Marsha Heyman, MU Hillel president; Herbert Walteer, Miami faculty member and treasurer of the Millet beard, and Dan Jacobs, also on the Miami faculty and president of the MU Hillel advisory board. The building is expected to be fully completed in January, and it will serve as a religious and cultural center for the Miami-Oxford Jewish community.

Description
Article from The Miamian