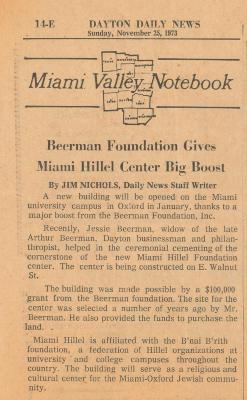 Article re: the $100,000 Grant from the Beerman Foundation towards the building of the Miami University Hillel Center, 1973

A new building will be opened on the Miami University campus in Oxford in January, thanks to a major boost from the Beerman Foundation, Inc.

Recently, Jessie Beerman, widow of the late Arthur Beerman, Dayton businessman and philanthropist, helped in the ceremonial cementing of the cornerstone of the new Miami Hillel Foundation center. The center is being constructed on E. Walnut St.

The building was made possible by a $100,00 grant from the Beerman Foundation. The site for the center was selected a number of years ago by Mr. Beerman. He also provided the funds to purchase the land.

Miami Hillel is affiliated with the B'nai B'rith foundation, a federation of Hillel organization at uiversity and college campuses throughout the country. The building will serve as a religious and cultural center for the Miami-Oxford Jewish community.