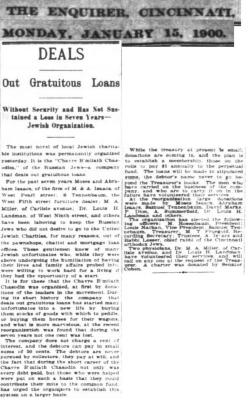 Article Regarding the 1900 Establishment of the Gemilas Chesed Society, Hebrew Free Loan Society of Cincinnati

The most novel of local Jewish charitable institutions was permanently organized yesterday. It is the “Chavre B’milath Chaodim,” of the Russian Jews - a company that deals out gratuitous loans.

For the past seven years Moses and Abraham Isaacs, of the firm of M. & A. Isaacs, of West Pearl street; S. Tennenbaum, the West Fifth street furniture dealer; M. A. Miller, of Carlisle avenue; Dr. Louis H. Landman, of West Ninth street, and others have been laboring to keep the Russian Jews who did not desire to go to the United Jewish Charities, for many reasons, out of the pawnshops, chattel and mortgage loan offices. These gentlemen knew of many Jewish unfortunates who, while they were above undergoing the humiliation of having their lives and family affairs probed into, were willing to work hard for a living if they had the opportunity of a start.

It is for these that the Chavre B’milath Chasodin was organized, at first by donations of the leaders in the movement. During its short history the company that deals out gratuitous loans has started many unfortunates into a new life by buying them stocks of goods with which to peddle, or buying them horses for their wagons, and what is more marvelous, at the recent reorganization was found that during the seven years not one cent was lost.

The company does not charge a cent of interest, and the debtors can pay in small sums of 50 cents. The debtors are never pursued by collectors; they pay at will, and the fact that during the short career of the Chavre B’milath Chasdoin not only was every debt paid, but those who were helped were put on such a basis that they could contribute their mite to the common fund has urged the organizers to establish this system on a larger basis.

While the treasury at present is small, donations are coming in and the plan is to establish a membership those on the rolls to pay $1 annually to the perpetual fund. The loans will be made in stipulated sums, the detbor’s name never to go beyond the Treasurer’s books. The men who have carried on the business of the company, and who are to carry it on in the future have volunteers their services.

At the reorganization large donations were made by Moses Isaacs, Abraham Isaacs, Samuel Tennenbaum, David Mars, P. Dion, A. Summerfield, Dr. Louis H. Landman and others.

Two physicians, Dr. M. A. Miller, of Carliale avenue, and Dr. Louis H. Landman have volunteered their services, and will call on any one at the request of the Treasurer. A charter was donated by Senator Cohen.