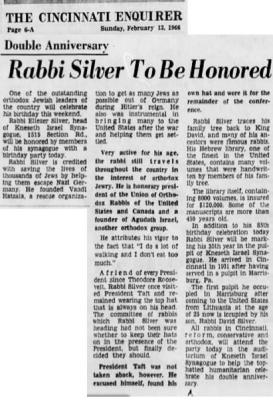 Article Regarding 85th Birthday Celebration of Rabbi Eliezer Silver in 1966

One of the outstanding orthodox Jewish leaders of the country will celebrate his birthday this weekend.

Rabbi Eliezer Silver, head of Kneseth Israel Synagogue, 1515 Section Rd., will be honored by members of his synagogue with a birthday party today.

Rabbi Silver is credited with saving the lives of thousands of Jews by helping them escape Nazi Germany. He founded Vaadi Hatzala, a rescue organization to get as many Jews as possible out of Germany during Hitler’s reign. He also was instrumental in bringing many to the United States after the war and helping them get settled.

Very active for his age, the rabbi still travels throughout the country in the interest of orthodox Jewry. He is honorary president of the Union of Orthodox Rabbis of the United States and Canada and a founder of Agudath Israel, another orthodox group.

He attributes his vigor to the fact that “I do a lot of walking and I don’t eat too much.”

A friend of every President since Theodore Roosevelt, Rabbi Silver once visited President Taft and remained wearing the top hate that is always on his head. The committee of rabbis which Rabbi Silver was heading had not been sure whether to keep their hats on in the presence of the President, but finally decided that they should.

President Taft was not taken aback, however. He excused himself, found his own hat and wore it for the remainder of the conference.

Rabbi Silver traces his family tree back to King David, and many of his ancestors were famous rabbis. His Hebrew library, on the of finest in the United States, contains many volumes that were handwritten by members of his family tree.

In addition to his 85th birthday celebration today, Rabbi Silver will be marking his 35th year in the pulpit of Kneseth Israel Synagogue. He arrived in Cincinnati in 1931 after having served in a pulpit in Harrisburg, Pa.

The first pulpit he occupied in Harrisburg after coming to the United States from Lithuania at the age of 25 now is occupied by his son, Rabbi David Silver.

All rabbis in Cincinnati, reform, conservative, and orthodox will attend the party today in the auditorium of Kneseth Israel Synagogue to help the tophatted humanitarian celebrate his double anniversary.