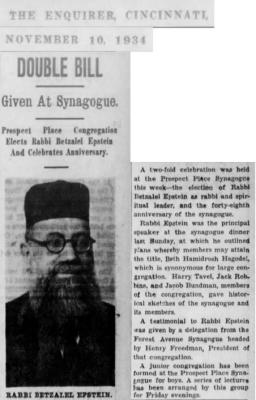 Double Bill
Given At Synagogue

A two-fold celebration was held at the Prospect Place Synagogue this week - the election of Rabbi Betzalel Epstein as rabbi and spiritual leader, and the forth-eighth anniversary of the synagogue.

Rabbi Epstein was the principal speaker at the synagogue dinner last Sunday, at which he outlined plans whereby members may attain the title, Beth Hamidrosh Hagodel, which is synonymous for large congregation. Harry Tavel, Jack Robins, and Jacob Bundman, members of the congregation gave historical sketches of the synagogue and its members.

A testimonial to Rabbi Epstein was given by a delegation from the Forest Avenue Synagogue headed by Henry Freedman, President of that congregation.

A junior congregation has been formed at the Prospect Place Synagogue for boys. A series of lectures has been arranged by this group for Friday evenings.