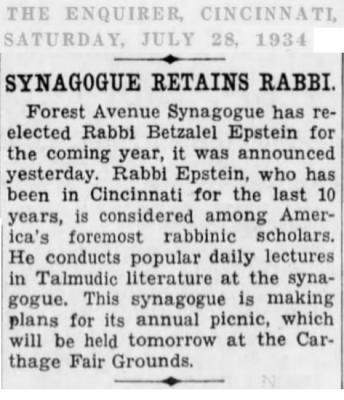 Forest Avenue Synagogue has re-elected Rabbi Betzalel Epstein for the coming year, it was announced yesterday. Rabbi Epstein, who has been in Cincinnati for the last 10 years, is considered among America’s foremost rabbinic scholars. He conducts popular daily lectures in Talmudic literature at the synagogue. This synagogue is making plans for its annual picnic, which will be held tomorrow at the Carthage Fair Grounds.