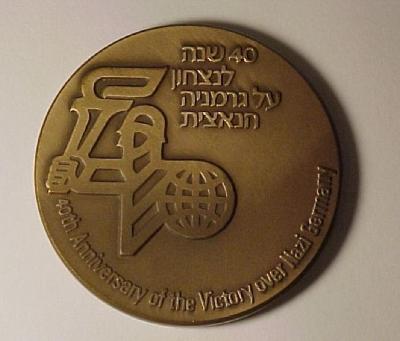 caption:
Obverse:          Features the monument to Jewish soldiers that stands at the Jewish Martyrs Memorial Institute of Yad VaShem in Jerusalem; in the center is a sword symbol of battle, and a Star of David – symbol of the Jewish people, with a block of stone on each of its sides – representing the six million martyrs.  In the field is the emblem of the State of Israel and the inscription, Glory be to the Jewish Soldiers & Partisans 1939-1945, in English and Hebrew.