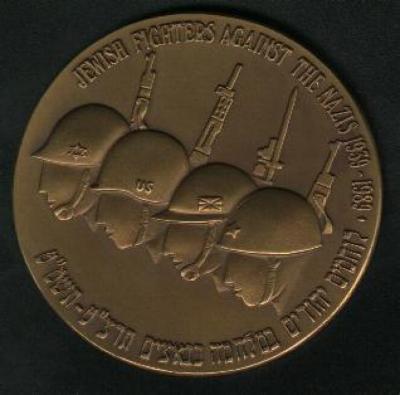 caption:
Obverse:          A banner, its flagpole topped by a Star of David, pitched into a broken swastika beside a torn Nazi flag.  To the right, the inscription in English and Hebrew, “Victory over the Nazis.”  The signature of Nathan Karp, the artist, in Hebrew.

Description
On November 11, 1945, Armistice Day of both World Wars, a Conference of Jewish Fighters convened in Paris.  Besides Jewish ex-servicemen, Jewish resistance fighters from several countries took part.  They were all representatives of one Jewish people, and thus the World Jewish Fighters’ Organization came into being.

This is a 70mm Tombac Medal (numbered 0991) issued in 1990 to honor Jewish fighters against the Nazis.  This medal commemorates the stubborn struggle of all Jewish fighters on all fronts and their substantial share in the final victory over the Nazi monster.