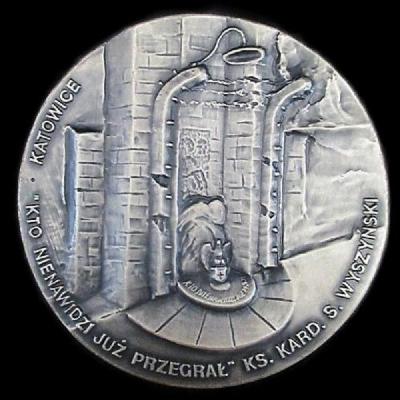 caption:
The Front/Obverse of this medal depicts a picture of a concentration camp fence supports with barb wire, the single loop lamp, the brick oven wall with the Eagle Cross Memorial Trophy sitting on the Shrine. The words written on the medal are " KTO Nienawidzi Juz Przegral KS Kard S Wyszynski " Written on the Shrine step on the medal are the words, “KTO Nienawidzi”

The medal comes in a box with the Society’s name and logo on the inside cover.