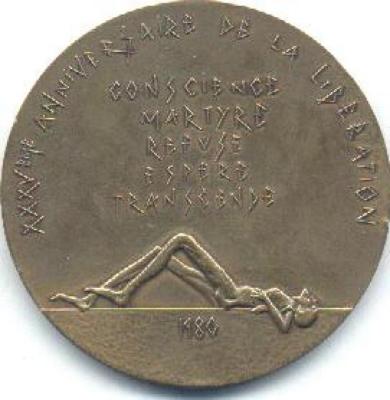 French Medal Commemorating the 35th Anniversary of the Holocaust

caption:
Obverse:          An emaciated and possibly dead Holocaust victim is pictured, with the date 1980 below. Around the top is XXXVeme ANNIVERSAIRE DE LA LIBERATION, and below in five lines is: CONSCIENCE, MARTYRE, REFUSE, ESPERE, TRANSCENDE.

Description
This medal was issued in 1980 on the 35th Anniversary of the Liberation of France.  It was issued in Bronze and is 68mm in diameter.

History:           The monument at Natzweiler-Struthof is called the Memorial of the Deportation. It was built to honor the French resistance fighters who were deported after they were captured while fighting against the German occupation after the defeat of France in June 1940. In May 1964, the Memorial was "dedicated to all the deportees, to perpetuate their memory, and with it, their heroism and their martyrdom," in the words of Dr. Leon Boutbein, one of the survivors