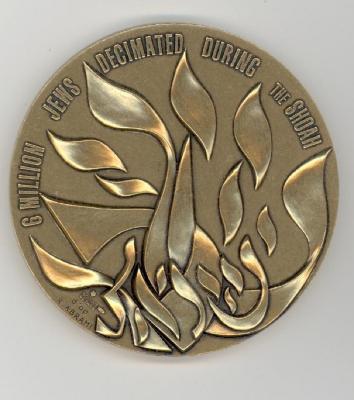 caption:
Obverse:          In the center field are Hebrew letters forming the word ______.  The letters are made to look like flames.  In the lower center field are smaller Hebrew letters, also designed to look like flames, forming the word ISRAEL.  The flames represent the fires in which the Jews of Europe were consumed during the Holocaust.  Curved around the upper rim is written in English “6 MILLION JEWS DECIMATED DURING THE SHOAH”.  In the lower left field is written “MONNAIE DR PARIS” and “d ap / R. ABRAMI”.

Description
This medal was issued in 1992 for the 50th anniversary of the Rafle du Vel d'hiv that took place in France July 16-17, 1942.  The roundup was one of several aimed at reducing the Jewish population in occupied France. According to records of the Préfecture de Police,' over 13,000 victims were arrested and held at the Vélodrome d'Hiver and the Drancy internment camp nearby, then shipped by railway transports to Auschwitz for extermination. French President Jacques Chirac apologized in 1995 for the complicit role that French policemen and civil servants served in the raid.  The medal was designed by artist, “d. ap. / R. Abrami” andwas minted by the Monnaie De Paris in Bronze (72mm) with a Paris mint hallmark.