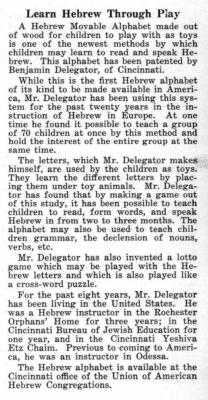 Article Regarding A Hebrew Movable Alphabet Developed by Benjamin Delegator, of Cincinnati

A Hebrew Movable Alphabet made out of wood for children to play with as toys is one of the newest methods by which children may learn to read and speak Hebrew. This alphabet has been patented by Benjamin Delegator, of Cincinnati.

While this is the first Hebrew alphabet of its kind to be made available in America, Mr. Delegator has been using this system for the past twenty years in the instruction of Hebrew in Europe. At one time he found it possible to teach a group of 70 children at once by this method and hold the interest of the entire group at the same time.

The letters, which Mr. Delegator makes himself, are used by the children as toys. They learn the different letters by placing them under toy animals. Mr. Delegator has found that by making a game out of this study, it has been possible to teach children to read, form words, and speak Hebrew in from two to three months, The alphabet may also be used to teach children grammar, the declension of nouns, verbs, etc.

Mr. Delegator has also invented a lotto game which may be played with the Hebrew letters and which is also played like a cross-word puzzle.

The Hebrew alphabet in available at the Cincinnati office of the Union of American Hebrew Congregations.