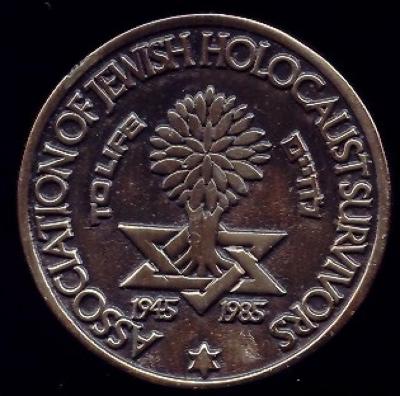 caption:
Obverse:          Association of Holocaust Survivors 1945 -1985.
In the middle is a Eucalyptus Tree growing from a Magen David with Lechaim and To Life in Hebrew and English

Description
As soon as World War II had ended, displaced Jews from Europe were welcome to Australia by their Jewish brothers and sisters who had already settled there.  The remnants of that immigration to Australia had a gathering in Sydney in the state of New South Wales to commemorate the 40th anniversary of their freedom and they had a bronze medal (50mm in diameter) struck for this occasion.