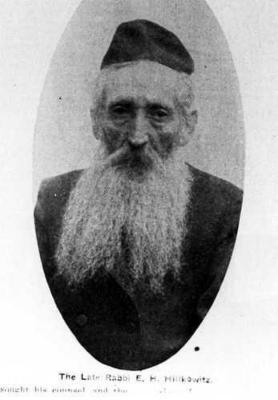 caption:
“(Rabbi Hillkowitz), who came to Denver in 1890, was deserving of all the respect that was shown him by the entire community. Rabbi Hillkowitz was born in Rutwan, Kovno, Russia, and educated in the Yeshivas of Woloczin, Zhitomir, and Kovno. He was ordained by the chief of the Russian rabbinate, Rabbi Isaac Elchanan, and served as a rabbi for the first time in Pickeln, Kovno. During the troubled years in Russia, he left the rabbinate for commercial pursuits, in which he acquired some wealth, but, driven from village to village, he lost it and came to the United States. In Cincinnati, the stronghold of Reform Judaism, he founded the first Orthodox synagogue and thus became the dean of that city’s rabbinate. Asthma brought him to Denver in 1890, and the following year he returned east to bring his family. In Denver Rabbi Hillkowitz was immediately recognized as the dean of the city’s Orthodox rabbinate”

A Memphis paper from 1886 with a story about a divorce by Rabbi Hillkowitz from Cincinnati – see second column from the right towards the end of the article a description on the Rabbis appearance: