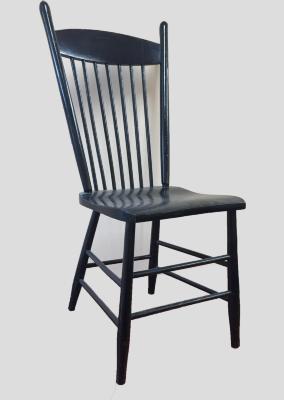 This furnishing was used by Rabbi Isaac Mayer Wise in his religious school classroom in the basement of Plum Street Temple.

Description
The Isaac M. Wise Temple was founded in 1840 (as K.K. Bene Yeshurun) and incorporated in 1842 by a group of young German Jews who were not in sympathy with the previously established English Congregation in Cincinnati, K.K. Bene Israel (Rockdale Temple).  It was renamed in the twentieth century in memory of Rabbi Isaac M. Wise who served the congregation for almost fifty years, and who played such a major role in the establishment of American Reform Judaism.
In 1848, the congregation had dedicated a synagogue "in Gothic style" on Lodge Street (now Ruth Lyons Way).  Its sanctuary held 250 persons.  (This building is no longer standing.)  In 1854, Isaac M. Wise was elected to serve as Rabbi of the congregation.  Here he laid the foundations for the institutions that would advance the cause and movement of American Reform: The Israelite (later The American Israelite), a weekly journal, (1854), currently the oldest continuously published Anglo-Jewish newspaper in America; the Union of American Hebrew Congregations (1873); the Hebrew Union College (1875); the Central Conference of American Rabbis (1889).
The building where these items of furniture were used was the second building constructed by the congregation; the Plum Street Temple on the corner of Ninth and Plum Streets, downtown.  The building, described as "Moorish in style", is still in use, has been magnificently restored, and has been placed on the National Register of Historic Places.  In 1927, the Isaac M. Wise Center on Reading Road and North Crescent was dedicated.  It reflected the movement of the community to the "hilltop suburbs".  Further suburbanization led to the sale of the building and construction of a new Isaac M. Wise Center in Amberley Village in 1976. Rabbis who have served the congregation through the years include Louis Grossman, James G. Heller, Samuel Wohl, Albert Goldman, Alan Fuchs.   Rabbi Lewis M. Kamrass has served as Senior Rabbi of Wise Temple since 1984.