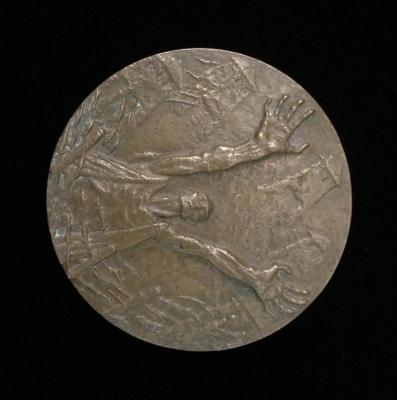 caption:
Obverse:          A picture of an emaciated concentration camp inmate reaching for freedom from behind barbed wire.

Description
This medal was issued for the 'Federation Nationale des Deportees et Internes Resistants et Patriotes' (FNDIRP).  It was designed by the artist Raymond Delamarre andissued in Bronze (2.4” in diameter) in a commemorative box.

The name Vercors was the pen name of the poet, Jean Bruller, and whose clandestine wartime novella, "The Silence of the Sea," moved the French nation and those who shared with France the agony of the German occupation in World War II. "The Silence of the Sea" was the story of a German who loved France and who tried for months to convince his French friends of Hitler's good intentions. He realized too late that he had been deceived by the Nazis. The novel was widely hailed as a powerful indictment of what the Nazis truly stood for in their occupation of France.

Created by the deportees and internees, FNDIRP, Association "1901 Act" was born in October 1945, five months after the victory over Nazism.  It stated purposes include carrying the legacy of those who, in the heart of the Nazi camps, made ​​the oath to testify on behalf of all those who would not return; those who were interned in prisons in occupied France, and fighters who regrouped after the war to accommodate survivors.