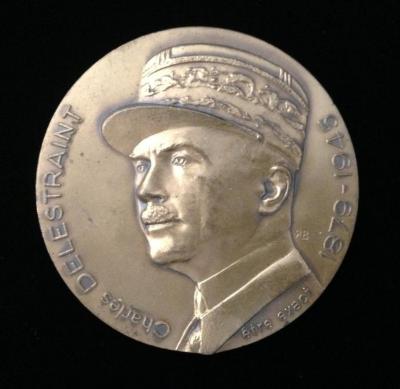 French Medal in Honor of Charles Delestraint, leader of the Armée Secrète during WWII in France, Executed in Dachau

Delestraint was captured in the beginning of World War I and spent it as a prisoner of war. After the war he remained in the army where he was a proponent for the use of armoured forces. He also befriended Charles de Gaulle.

Delestraint retired in 1939 but was recalled to service after the outbreak of World War II. During the Battle of France, on 3 June 1940, he led the armoured counterattack against Germans in Abbeville.
After the surrender of France on 25 June, he retired to Bourg-en-Bresse where Henri Frenay recruited him for the French Resistance. Delestraint began to organize resistance in Lyon. He clandestinely visited Charles de Gaulle in London and agreed to lead the Armée Secrète. He returned to France on 24 March 1943. However, due to informant René Hardy, he was arrested by the Gestapo on 9 June and interrogated by Klaus Barbie. He was taken as special prisoner (Nacht und Nebel) to Natzweiler-Struthof and then to the Dachau concentration camp, where he was executed on 19 April, only a few days before the camp was liberated and the war ended