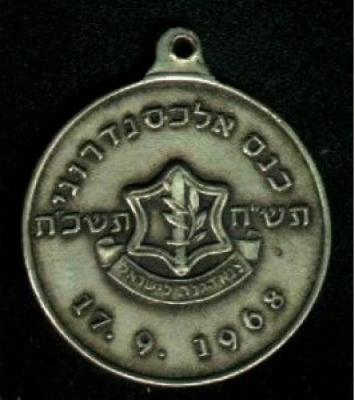 Medallion Commemorating the Alexandroni Brigade Reunion on September 17, 1968 and the 20th Anniversary of the State of Israel

caption:
The front / obverse depicts the IDF emblem and around in Hebrew: "Alexandrone Brigade convention 1948 – 1968"

Description
The Alxandroni Brigade of 1948 (The 3rd Brigade) fought in the battles of "Operation Danny" (Ramleh-Lod), fought to conquer Tantura (along the coastal plain), and took part in a number of battles on the southern front and at Ein Gedi. The Brigade's most significant contribution was the widening of Israel’s borders in the Arad-Dead Sea region while stabilizing the south-eastern border of the State of Israel.

In September, 1949, the original 3rd Brigade was disbanded, along with other brigades, once the Israeli home front returned to routine civilian life.