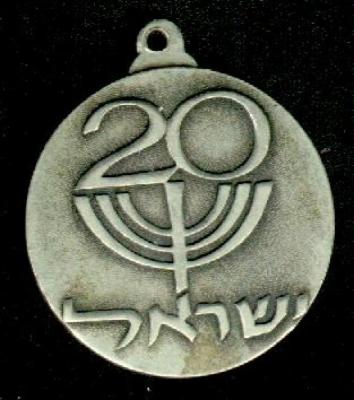 Medallion Commemorating the Alexandroni Brigade Reunion on September 17, 1968 and the 20th Anniversary of the State of Israel

caption:
The back / reverse depicts the Emblem of the 20th Anniversary of the Establishment of the State of Israel

Description
The Alxandroni Brigade of 1948 (The 3rd Brigade) fought in the battles of "Operation Danny" (Ramleh-Lod), fought to conquer Tantura (along the coastal plain), and took part in a number of battles on the southern front and at Ein Gedi. The Brigade's most significant contribution was the widening of Israel’s borders in the Arad-Dead Sea region while stabilizing the south-eastern border of the State of Israel.

In September, 1949, the original 3rd Brigade was disbanded, along with other brigades, once the Israeli home front returned to routine civilian life.