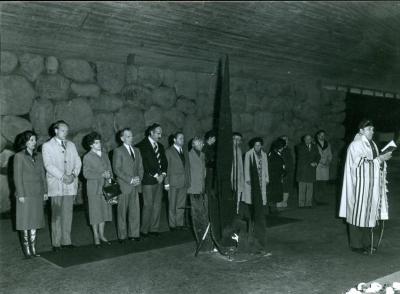 The Hall is an imposing structure, with walls made of basalt boulders brought from the area surrounding the Sea of Galilee, and an angular roof that gives it a tent-like shape. Engraved on the mosaic floor are the names of 22 of the most infamous Nazi murder sites, symbolic of the hundreds of extermination and concentration camps, transit camps and killing sites that existed throughout Europe.

The Eternal Flame, burning from a base fashioned like a broken bronze goblet, continuously illuminates the Hall, its smoke exiting the building through an opening at the highest point of the ceiling. Before it stands a stone crypt containing the ashes of Holocaust victims, brought to Israel from the extermination camps.

The Eternal Flame was designed by Kosso Eloul

Image is part of the Henry Blumenstein Collection