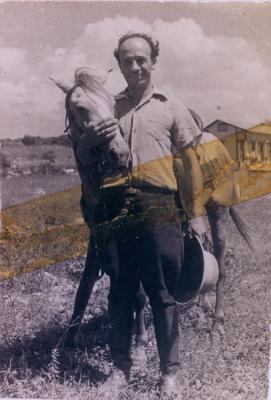 Photographs and Documents Relating to Franz Blumenstein at the Jewish Agricultural Colony in Sosua, Dominican Republic

caption:
Photo of Franz Blumenstein standing next to a horse

Photo is part of the Henry Blumenstein Collection

Description
In March 1938, U.S. President Franklin Roosevelt convened a 32-nation conference at Evian-les-Bains, France, to discuss the resettlement of German and Austrian Jewish refugees to other lands. At that time, the Nazi regime was still agreeing to let Jews emigrate if they transferred their assets to the German government. The assembled nations endorsed the idea of resettlement but agreed that no nation would "be expected or asked to receive a greater number of emigrants than is permitted by existing legislation." Given the immigration restrictionist and anti-Semitic moods of the Depression era, this meant that, in effect, no nation – even the United States – was expected to take more than a few thousand refugees.

Only the Dominican Republic, led by dictator Rafael Trujillo, expressed a willingness to accept a significant number - between 50,000 and 100,000 Jews - an offer to which the American Jewish Joint Distribution Committee jumped.

The Dominican government welcomed the Jews on the condition that they become agricultural workers rather than "commission agents." The Joint Distribution Committee created a special organization, the Dominican Republic Settlement Association (DORSA) and funded it to purchase 26,000 acres in the Dominican town of Sosua, which had previously been developed as a banana plantation but then abandoned by the United Fruit Company.

On January 30, 1940. DORSA officials signed a contract with the Trujillo regime.

The refugees were settled in the tiny seacoast town of Sosua, then just jungle land, that Trujillo had established with funding provided by the American Jewish Joint Distribution Committee. Upon arrival, every new Jewish settler was given 80 acres of land, 10 cows, a mule and a horse.

Despite the promise of escaping Europe, only 50 Jews were able to make their way to the Dominican Republic in the first year of the program. Submarine warfare in the Atlantic and the need to use Allied ships for troops and supplies made it incredibly hard to relocate refugees.

DORSA imported experts from kibbutzim in Palestine to teach the settlers communal agriculture. They helped design and build a communal meat processing plant and butter and cheese factory and recommended raising lemongrass for its oil, which is commercially used in perfume. A trickle of refugee settlers continued to the town despite the fact that the American entry into the war made it even harder to cross the Atlantic.

In October 1941, the Nazis cut off Jewish emigration from the territories they occupied in Europe. Sosua’s Jewish population peaked at about 500. By this point, DORSA had invested about $1 million in the project.

By 1944, Sosua’s fortunes turned, DORSA abandoned communal agriculture and gave the settlers private plots. The colonists focused on raising cattle and butter and cheese production. Eventually, they learned to prosper. While some left for the U.S. or Israel, others stayed.