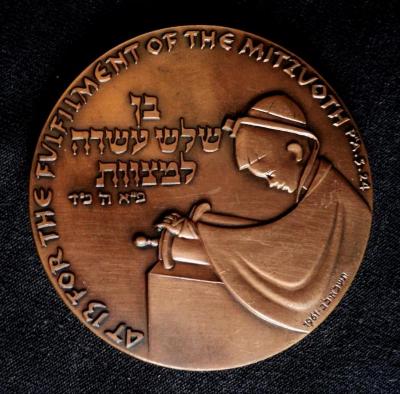 caption:
The front / obverse:          Shows a youth reading from the Torah (Scroll of the Law) on the occasion of his Bar-Mitzvah, wearing a yarmulka (skullcap), tallit (prayer shawl) and tfillin (phylacteries). On the edge of the tallit appears the year 1961 in Hebrew and in English; in the center is the Hebrew inscription, 'BEN SHALOSH ESRAY LAMITZVOT (Ethics of the Fathers 5:24); around the rim is the English translation, 'At 13 for the Fulfillment of the Mitzvoh P'a5 24

Description
In 1961, in honor of the 13th Anniversary of Israel’s creation as a state (after almost 2000 years in exile since the Roman destruction of the prior Jewish state), numerous memorabilia were created.

A series of State Medals known as the Bar-Mitzvah Medals, was issued by the Israel Government Coins and Medals Corporation (the “IGCMC”) in bronze, silver and gold. These medals were struck in various sizes as follows:

** The 19mm silver medal exists in three varieties:
(a) without mintmark on obverse.
(b) with mintmark letter 'kaf on obverse, at base of lectern.
(c) mounted on a keychain.

Since the original issues of these medals were sold out due to their popularity and suitability as Bar-Mitzvah gifts, the IGCMC re-issued the medal with large tribes in 1971 in 45mm bronze and silver with unlimited mintage.