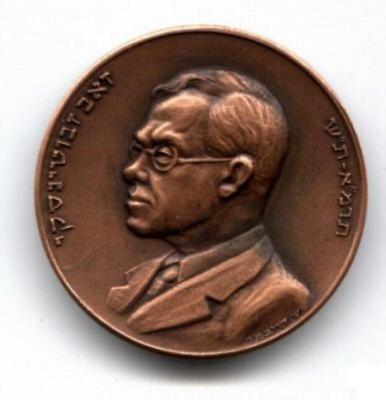 Description
This medal was issued in commemoration of the moving of the grave of Ze’ev Jabotinsky from his grave in New York to Israel.

Jabotinsky died of a heart attack in New York, on 4 August 1940, while visiting a Jewish self-defense camp run by Betar. He was buried in New Montefiore cemetery in New York rather than in Pre-State Israel, then called, Palestine, in accordance with the statement in his will, "I want to be buried outside Palestine, may NOT be transferred to Palestine unless by order of that country's eventual Jewish government."

Initially, after the State of Israel was established, the governments headed by Prime Minister David Ben-Gurion (who had been a political rival of Jabotinsky) did not make such a decision, but in 1964, shortly after becoming Prime Minister, Levi Eshkol ordered the re-interment of Jabotinsky and his wife in Jerusalem at Mount Herzl Cemetery. A monument to Jabotinsky remains at his original burial site in New York.