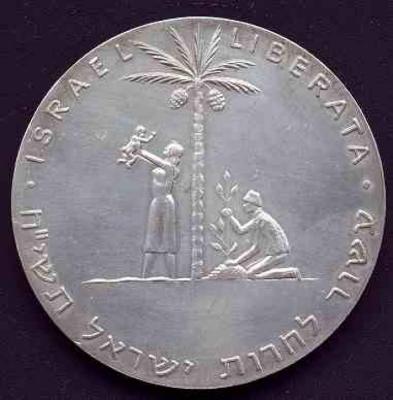 caption:
The front / obverse of this medal shows in the center a symbol of Israel’s liberation: A farmer plating a tree, a gleeful woman holding her child aloft, a seven branched palm tree bearing two clusters of fruit.  Around the rim, the Hebrew inscription “A decade of Israel’s Liberation 5718 (1948) and in Latin “Israel Liberation”.

Topics
Establishment of the State of Israel; 10th Anniversary (1958)

Description
The consequences of the great Judean Revolt against Rome which began in 66 C.E. had a dire effect upon Jewish history.  All the valor and the fierce fanaticism of the defenders could not withstand the onslaughts of the Roman legions stationed locally and later reinforced by two additional legions drawn from the Danube legion and the auxiliary forces recruited from the nearby provinces.  The Temple was destroyed in 70 C.E. and Titus celebrated his victory.

The Romans struck a special series of coins to commemorate the occasion known as the “Judea Capta” series, so named for the inscription on the coins “Judea in Captivity”.  The palm tree on the coins generally stands for Judea.  At the side of the tree, a Jewish captive (a man or a woman), prizes of war, an image of the victorious Emperor, or other representatives.

The “Liberation” medal was first issued by Israel in 1958 in connection with its Tenth Anniversary.  The State Medal depicts the contrast – the destruction of the Temple versus the renewal of Jewish Independence in our time.  A Hebrew farmer planting a sapling in place of a Jewish captive hand bound; a jubilant Hebrew mother holding her infant aloft instead of the sorrowful Jewish woman weeping for the destruction of her homeland.