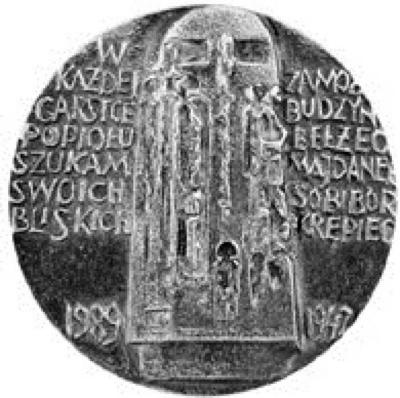 caption:
The front/obverse depicts the Monument to the Victims, located in Lublin, Poland.  The shape of the memorial resembles the shape of a tombstone (matzevah).  The left side of the monument has the inscription in Polish, “In each handful of ashes I search for my relatives 1989”.  On the right side of the monument, are listed the names names of the work and extermination camps, to which the Lublin Jews were transported during the occupation: Bełżec, Sobibór, Majdanek, Budzyń, Zamość and Krepiec and the date, 1942 (the year of the extermination of the ghetto in Lublin.)

Description
This medal was issued in honor of the Jewish Communities in the Southeast part of Poland which were destroyed during the Shoah.  The medal was designed by the Polish artist, Jolanta Slomianowska.

In 1962 a monument commemorating the victims of Holocaust was unveiled on the Square of Ghetto Victims, on the 20th anniversary of the extermination of the ghetto in Lublin. The monument was designed by Jan Tarabuła and Bogumił Zagajewski. It was made of dark stone and resembles the shape of tombstone (matzevah). At its base there are names of the work and extermination camps, to which the Lublin Jews were transported during the occupation (Bełżec, Sobibór, Treblinka, Majdanek, Trawniki, Poniatowa, Budzyń i Zamość).

Several inscriptions were engraved on the monument. These include a sign: “In eternal memory of the Polish citizens of Jewish origin from the Lubelskie province, who were atrociously murdered by the Nazi during the years of World War II”, a quote in Yiddish and Polish from “The Song of the Murdered Jewish Nation” by Itzhock Kanzenelson: “In every handful of ash I seek my friends”. In the course of time, the monument was transported to the corner of Radziwiłłowska and Niecała Street.