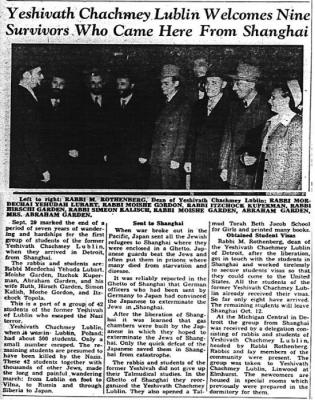 Article on Yeshiva Chachmei Lublin of Detroit Welcoming Nine Survivors of the Holocaust who were Joining the Yeshiva after Surviving the Holocaust in Shanghai - Detroit Jewish News, October 11, 1946

Sept. 29 marked the end of a period of seven years of wandering and hardships for the first groupf of students of the former Yeshivath Chachmey Lublin, when they arrived in Detroit from Shanghai.

This is part of a group of 42 students of the former Yeshivah of Lublin who escaped the Nazi terror.

Yeshivath Chachmey Lublin when it was in Lublin Poland had about 500 students. Only a small number escaped. The remaining students are presumed to have been killed by the Nazis. These 42 students together with thousands of other Jews, made the long and painful wandering march: from Lublin on foot to Vilna, to Russia and through Siberia to Japan.

When war broke out in the Pacific, Japan sent all of the Jewish refugees to Shanghai where they were enclosed in a Ghetto, Japanese guards beat the Jews and often put them in prisons where many died from starvation and disease.

It was reliably reported in the Ghetto of Shanghai that German officers who had been sent by Germany to Japan had convinced the Japanese to exterminate the Jews in Shanghai.


After the liberation of Shanghai it was learned that gas chambers were built by the Japanese in which they hoped to exterminate the Jews of Shanghai. Only the quick defeat of the Japanese saved them in Shanghai from catastrophe.

The rabbis and students of the former Yeshivah did not give up their Talmudical studies. In the Ghetto of Shanghai they reorganized the Yeshvath Chachmey  Lublin. They also opened a Talmud Torah Beth Jacob School for Girls and printed many books.

At the Michigan Central in Detroit the group from Shanghai was received by a delegation consisting of rabbis and students of Yeshivath Chachmey Lublin, headed by Rabbi Rothenberg. Rabbis and lay members of the community were present. The group was taken to Yeshivath Chachmey Lublin, Linwood at Elmhurst. The newcomers are housed in special rooms which previous were prepared in the dormitory for them.