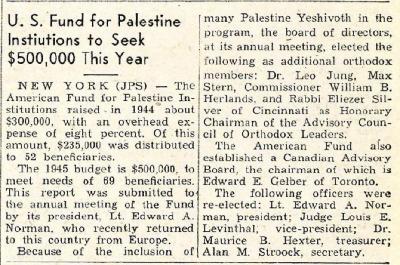 Article on 1944 Fundraising of The American Fund for Palestine Institutions

The 1945 budget is $500,000, to meet needs of 69 beneficiaries. This report was submitted to the annual meeting of the Fund by its president, Lt. Edward A. Norman, who recently returned to this country from Europe.

Because of the inclusion of many Palestine Yeshivoth in the program, the board of directors, at its annual meeting, elected the following as additional orthodox members: Dr. Leo Jung, Max Stern, Commissioner William B. Herlands, and Rabbi Eliezer Silver of Cincinnati as Honorary Chairman of the Advisory Council of Orthodox Leaders.

The American Fund also established a Canadian Advisory Board, the chairman of which is Edward E. Gelber of Toronto.

Topics
Rabbi Silver’s Involvement with Major Jewish Organizations and Causes; Eretz Yisroel (The Land of Israel); Establishment of the State of Israel