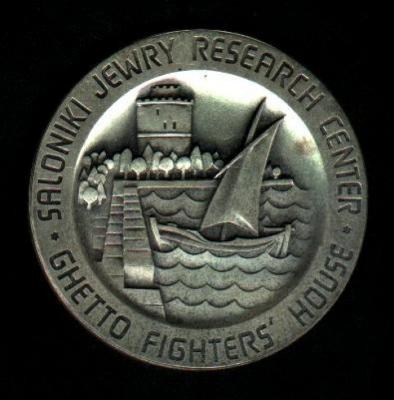 caption:
In the center field is a picture of the coast of the city of Saloniki, showing a small sailboat approaching a dock with a tower in the background.  Curved around the rim is written “SALONIKI JEWRY RESEARCH CENTER / GHETTO FIGHTERS HOUSE”

Description
This medal was commissioned by Beit Lohamei Haghetto’at, the Ghetto Fighter’s House in Israel at Kibbutz Yad Mordecai.  The medal was issued in silver and Bronze.  The silver medals are stamped with “SHEKEL”.  Each medal is individually numbered on the edge.