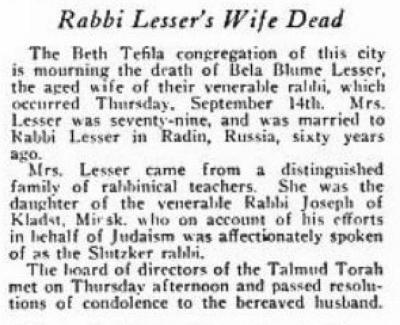 caption:
From the American Jewish Chronicle  - 1916

The Beth Tefila congregation of this city is mourning the death of Bela Blume Lesser, the aged wife of their venerable rabbi, which occurred Thursday, September 14th. Mrs. Lesser was seventy-nine, and was married to Rabbi Lesser in Radin, Russia, sixty years ago.

Mrs. Lesser came from a distinguished family of rabbinical teachers. She was the daughter of the venerable Rabbi Joseph of Kladst, Mirak, who on account of his efforts in behalf of Judaism was affectionately spoke of as the Slutzker rabbi.

The board of directions or the Talmud Torah met on Thursday afternoon and passed resolutions of condolence to the bereaved husband.

Description
From the American Jewish Chronicle