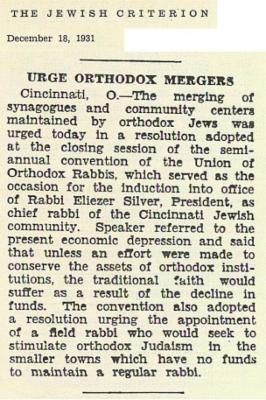 Cincinnati, 0.—The merging of synagogues and community centers maintained by orthodox Jews was urged today in a resolution adopted at the closing session of the semi-annual convention of the Union of Orthodox Rabbis, which served as the occasion for the induction into office of Rabbi Eliezer Silver, President, as chief rabbi of the Cincinnati Jewish community. Speaker referred to the present economic depression and said that unless an effort were made to conserve the assets of orthodox institutions, the traditional faith would suffer as a result of the decline in funds. The convention also adopted a resolution urging the appointment of a field rabbi who would seek to stimulate orthodox Judaism in the smaller towns which have no funds to maintain a regular rabbi.