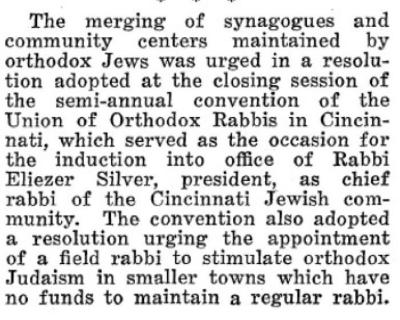 caption:
From The Chicago Sentinel
December 4, 1931

The merging of synagogues and community centers maintained by orthodox Jews was urged in a resolu-tion adopted at the closing session of the semi-annual convention of the Union of Orthodox Rabbis in Cincin-nati, which served as the occasion for the induction into office of Rabbi Eliezer Silver, president, as chief rabbi of the Cincinnati Jewish com-munity. The convention also adopted a resolution urging the appointment of a field rabbi to stimulate orthodox Judaism in smaller towns which have no funds to maintain a regular rabbi.