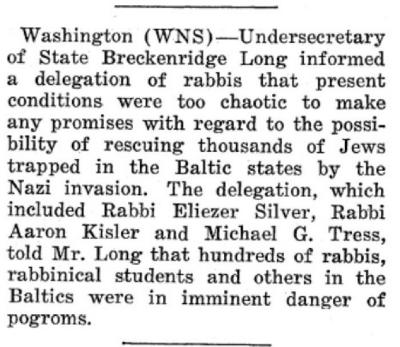 caption:
From the Chicago Sentinel
July 3, 1941

Washington (WNS)—Undersecretary of State Breckenridge Long informed a delegation of rabbis that present conditions were too chaotic to make any promises with regard to the possibility of rescuing thousands of Jews trapped in the Baltic states by the Nazi invasion. The delegation, which included Rabbi Eliezer Silver, Rabbi Aaron Kisler and Michael G. Tress, told Mr. Long that hundreds of rabbis, rabbinical students and others in the Baltics were in imminent danger of pogroms.