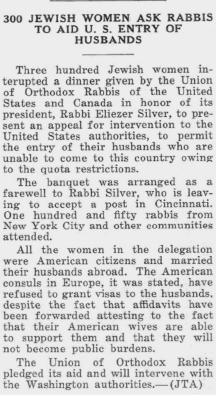 caption:
300 JEWISH WOMEN ASK RABBIS TO AID U. S. ENTRY OF HUSBANDS
Three hundred Jewish women in-terupted a dinner given by the Union of Orthodox Rabbis of the United States and Canada in honor of its president, Rabbi Eliezer Silver, to pre-sent an appeal for intervention to the United States authorities, to permit the entry of their husbands who are unable to come to this country owing to the quota restrictions. The banquet was arranged as a farewell to Rabbi Silver, who is leav-ing to accept a post in Cincinnati. One hundred and fifty rabbis from New York City and other communities attended. All the women in the delegation were American citizens and married their husbands abroad. The American consuls in Europe, it was stated, have refused to grant visas to the husbands, despite the fact that affidavits have been forwarded attesting to the fact that their American wives are able to support them and that they will not become public burdens. The Union of Orthodox Rabbis pledged its aid and will intervene with the Washington authorities. (JTA)