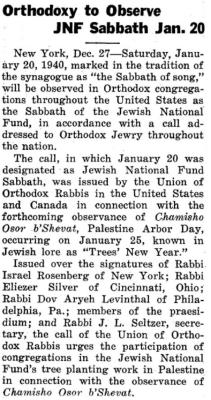 Article Regarding Orthodox Jews in the United States to Observe a Jewish National Fund Sabbath Jan. 20 1940

New York, Dec. 27 Saturday, January 20, 1940, marked in the tradition of the synagogue as "the Sabbath of song," will be observed in Orthodox congrega-tions throughout the United States as the Sabbath of the Jewish National Fund, in accordance with a call addressed to Orthodox Jewry throughout the nation.

The call, in which January 20 was designated as Jewish National Fund Sabbath, was issued by the Union of Orthodox Rabbis in the United States and Canada in connection with the forthcoming observance of Chamisho Osor b'Shevat, Palestine Arbor Day, occurring on January 25, known in Jewish lore as "Trees' New Year."

Issued over the signatures of Rabbi Israel Rosenberg of New York; Rabbi Eliezer Silver of Cincinnati, Ohio; Rabbi Dov Aryeh Levinthal of Philadelphia, Pa.; members of the praesidium ; and Rabbi J. L. Seltzer, secretary, the call of the Union of Ortho-dox Rabbis urges the participation of congregations in the Jewish National Fund's tree planting work in Palestine in connection with the observance of Chamisho Osor b'Shevat.

Description
Article from ​The Jewish Sentinel