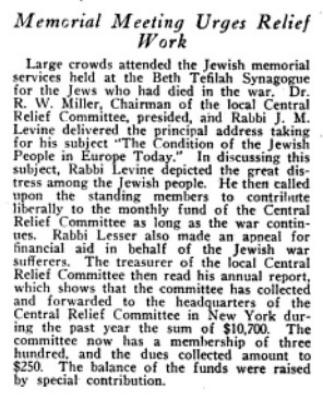 caption:
From the American Jewish Chronicle

Large crowds attended the Jewish memorial services held at the Beth Tefilah Synagogue for the Jews who had died in the war. Dr. R. W. Miller, Chairman of the local Central Relief Committee. presided, and Rabbi J. M. Levine delivered the principal address taking for his subject "The Condition of the Jewish People in Europe Today." In discussing this subject, Rabbi Levine depicted the great distress among the Jewish people. He then called upon the standing members to contribute liberally to the monthly fund of the Central Relief Committee as long as the war continues. Rabbi Lesser also made an appeal for Financial aid in behalf of the Jewish war sufferers. The treasurer of the local Central Relief Committee then read his annual report, which shows that the committee has collected and forwarded to the headquarters of the Central Relief Committee in New York during the past year the sum of $10,700. The committee now has a membership of three hundred, and the dues collected amount to $250. The balance of the funds were raised by special contribution.